En route from MA to NY post holidays, we decided to duck in to New Haven for a slice (or six) of famous New Haven pizza. It was raining, anyways (a whopping 54 degrees in late December) and we figured an hour off the road would be a good thing.

Pizza might be one of our most favorite things, and after a month of travel in non-pizza-friendly parts of Europe, we decided to go all out and try our luck at the (in)famous  Sally’s Apizza. 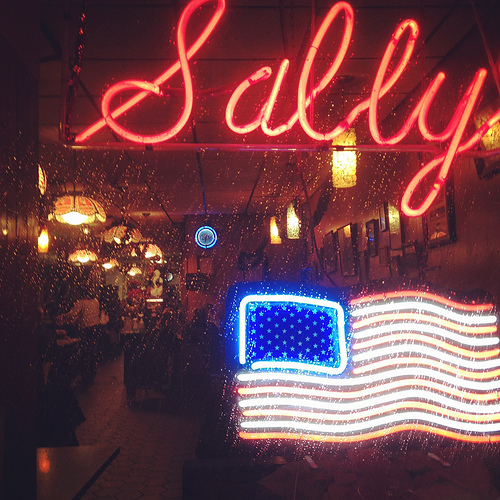 We arrived at 6:32 pm and huddled beneath the umbrella of a nice New Havener holding the line for his family in front of us for fifteen minutes before squeezing in to the oh-so-small doorway, where we stood, practically drooling, debating the finer points of New Haven’s various pizzerias, until being seated at 8.

(When you wait this long, no one stares when two larges arrive at a table for two. Though our waiter, a friendly Dad-like figure wearing a Brown Skiing t-shirt – small world – did announce the arrival of our pizzas with a joke about our healthy appetite…)

Does their 1938 coal oven cook only one pie at a time?

We won’t wax poetic about pizza. It’s a hotly debated and ultimately subjective topic – particularly in New Haven.  So why suffer a 2+ hour wait, in the rain, for a slice of Sally’s? When Pepe’s is down the street, and also in Fairfield en route? And Motorino awaits us in Brooklyn?

Because the cheeseless pie (or, “plain” as they say) at Sally’s is, simply, unrivaled on planet earth.  In fact, it is so good that Dan needs to eat a few handfuls of corn flakes so he won’t feel too hungry looking at the picture below. (And lo and behold, he does anyway…).

Cheeseless?! We can almost feel the skepticism in your eyes…. Yes. Cheeseless. It seems counter-intuitive. Even bizarrely un-pizza-like. And yet, when the crust is just-so chewy and charred, and the sauce is tart and tasting of tomatoes, when the two things that make a pizza a pizza are as delicious as they are at Sally’s, it just works. The slices melt in your mouth – gone so quickly that you wonder whether they were ever there in the first place.

And the potato pie, which is all cheese and no sauce, is the perfect compliment.  The paper thin potatoes crisp in the oven, and the pie arrives fragrant of rosemary and onions. Another eyebrow-raising combination that just works.

The next time you drive close to Wooster street, carve out some time for Sally’s. It’s worth the wait. At least once.

One happy, coal-fired thumbs up!

I’ll always be loyal to my home @bklynlibrary branch (The Leonard St branch, star of A Tree Grows in Brooklyn) but guys … the new Adams St branch in Dumbo is 🤩🤩🤩 First new branch to be built since 1983! What should I add to my reading list? 📖
@danedinberg x 💛💛💛💛💛💛💛
View from above.
Just a normal morning in @dumbobrooklyn 🐘☕️
View from the office 🎠☀️
NYC x 13🗽😎
Life in the park. @indiapointparkfriends
Birthday boy. 😎🌊
El Litoral, the daily paper in Santa Fe, Argentina, recently published a photo story of “La Primera” - a piano factory in Pilar (population 7,000; including a few dozen of my extended prim@s y tí@s!) in the province of Santa Fe, Argentina. As its name suggests, it was the first piano factory, not only in Argentina but in all of South America, producing and exporting artisanal instruments from 1939 to 1992. At its peak, in the ‘50s and ‘60s, it made 1,200 pianos a year, under the moniker Burmeister, and employed most of the town.
Slogging through email, but make it picturesque. 😎