In 2008, my family took a family trip to Mexico the week I started my first job in NYC. It wasn’t intentional (so they say), and though certainly jealousy inducing, new job jitters and new (york) city promises were enough to soften the blow.

Four years later, the job’s all but forgotten, though the city is as exciting. And the vacation? It’s become the family vacation that’s always talked about. The standard to which all other moments are held. Endless talk of sunlight, of fresh air and blue oceans, of fish tacos. Seriously, it’s been four years. And still.

Summer’s arrived with a vengeance in the city, with its heat waves that leave one gasping and its epic thunderstorms that send strangers huddling under scaffolding and in subway entrances. As always, summer brings the Mexico talk to the fore, so it was only a matter of time before we made some fish tacos. (In retaliation, of course.)

There’s nothing like fish tacos – spicy and flavorful and dripping with juice – to bring summer to the table. They’re colorful and evocative, and come together with minimal stove time – key for hot days. Plus they make for fun tabletops and DIY meals with friends: 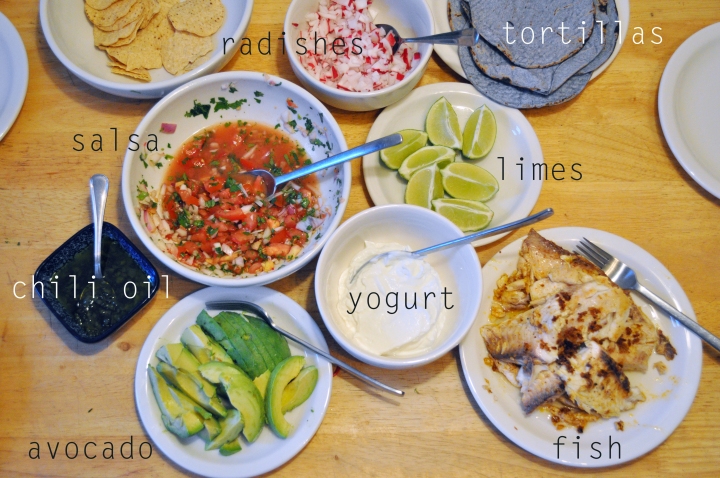 Here’s how we make ours!

(We had some garlic scapes on hand, so at the last minute we chopped and sauteed them for a touch of garlic.)

2 lbs tilapia or your favorite white fish
A jalapeño, or hot pepper of your choice
3 tomatoes
1 medium sized red onion
A bunch cilantro
4 limes
An avocado, or two!
Greek yogurt
2 or 3 small radishes
Corn tortillas, as many as you think you’ll eat.

1. Marinate the fish. Sprinkle tilapia generously with salt, cayenne and hot paprika. Douse with olive oil and a lime’s worth of juice. Cover and set in the fridge to quasi-marinate for at least 30 minutes.

2. Make some homemade chili oil. Dice the jalapeño, and place in a small non-corroding pot. Cover with olive oil, and heat on very low heat while you prep the rest of the meal. The hotter the pepper (and the more of it!) and the longer you let it simmer, the more flavorful your chili oil. (Leftovers keep well, covered, in the fridge.)

3. Make some homemade salsa. Dice the tomatoes and red onion. Mix in a handful of chopped cilantro. Add some swirls of olive oil, the juice of another lime, and salt & pepper to taste.

3. Prep toppings. This part is easy. Doll out the Greek yogurt, slice the avocados, dice the radishes and quarter the rest of the limes.

4. Cook the fish. Heat a splash of olive oil in a skillet over medium heat. When the oil is hot, add the fish and saute until golden brown on each side (about 2 – 4 minutes a side, depending on the thickness of the filet).

5. Toast tortillas. We’re partial to toasting our tortillas directly on the stove. Turn the unused burners on medium-low. Put a tortilla directly on the burner for 5 – 10 seconds — you’ll see the tortilla begin to swell with the heat — and then flip (use tongs!) and toast on the other side for a few seconds more.