The Stepkids finished up a mini-tour in Chicago June 9th at Lincoln Hall, which left us with a van-full of equipment to drive back to Bridgeport, CT. Foodie road trip was born. Here’s what we learned about the northern Midwest and upstate New York: 1. chicken is the American meat; 2. there is, apparently, no seltzer outside of our East Coast existence; and 3. Michigan makes some mean microbrews. Oh, also, that these parts of the USA are pretty spectacular.

And here’s what we ate:

First up, Chicago, where we started off Day One with hot dogs from Hot Doug’s (yes, people start queue-ing at 10:30am.) The specials were fantastic: truffle infused chicken sausage with jalapeño goat cheese & orange marmalade, and duck sausage with some delicious cheese that we were too busy eating to really notice what it was…But it was the straight-up hot dog, Chicago-style with all the trimmings, that really made it for us. And the duck fat fries. Not bad for 11 am.

Next, we stopped in at Big Star for some hipster Mexican. The tacos were tasty and locally sourced, though nothing to really write home about (next time we’ll try our luck in Pilsen), but the ensalada is sure to be copied in the 223 Devoe Street kitchen (hiding under the pumpkin seeds and queso fresco: mint! radishes! black beans!)

The evening brought a pleasant surprise with Pleasant House. We stopped in on our way to the speakeasy Maria’s Packaged Goods & Community Bar in search of dessert. Alas, they were out, so we continued on to Maria’s for a drink, where we discovered what could be one of our top 3 American beers – Dragon’s Milk, an impeccable stout from Michigan’s New Holland Brewery. (Plus the DJ at Maria’s was spinning “Lanquidity” by Sun Ra! Everything Death & Co. wants to be but isn’t!) On the way out, we tucked back in to Pleasant House, as an afterthought, to get a cup of tea before a late-night drive, and ended up staying for a cookie (freshly baked since our first inquiry!) and a fantastic chicken balti pie with coriander chutney (the chicken tour begins).  Turns out the chef, Art Jackson, who makes savory pies much like ¡dpm!, had seen us on the Cooking Channel. And he has great taste in music (promptly played The Stepkids on the house system.) Add to this that Pleasant House is located in the Chicago neighborhood of Bridgeport – the CT version of which was to be our final stop on our trip – and well, just a funny world-colliding night of coincidences and like minded folks.

Day Two took us to Michigan. After a stop at Oval Beach (best beach ever?!), we had the unfortunate experience of lunching at Rosie’s Diner in Rockford, MI. Old-school Americana that’s made all the big TV shows, sure. But food-wise,  mostly inedible. It’s ok. The red movie-set booths and the intriguing locals (kind of) made up for it.

*Note to self: don’t order biscuits and gravy in suspicious-looking places.

Fudge is big in Traverse City. And, it turns out, everywhere along the Canadian border. We picked up three slices – dark chocolate, cherry chocolate and mud (white chocolate with caramel and more dark chocolate swirls) and…well, it made for good van food, to be sure.

The evening finished off with a beer tasting at the Right Brain Brewery.  Surprisingly the beer that most impressed us was gluten free!  The ‘Bingo Bango’, pictured on the far right, brewed with wild MI rice, local MI honey, and local MI maple syrup.  (Michigan folks, as we discovered, are all about – Michigan.) Surmounting this kind of brewing challenge really separates the pro brewers from everyone else. Thumbs up to Right Brain.

First thing on Day Three was a drive to the old fishing village of Leland, MI, where we were pleasantly surprised at how delicious the smoked fish sausage was at Carlson’s, as well as the fish paté.  Native wild whitefish available year-round?? Yeah, we considered a MI move…for a second.

Driving along Route 75 to Ann Arbor that evening, we came upon a bright yellow billboard advertising Iva’s Famous Chicken Dinners in Sterling MI. We’d never bought something from a billboard before, and a quick yelp review yielded just one (albeit raving) entry. But we were hungry and far from the end of the day and, though slightly skeptical, drove into the sunset in search of Iva’s (and got lost – there’s a dearth of street signs are in rural Michigan.) We’re glad we found it, because it was possibly the best meal of the entire trip.

Iva’s has been open since 1938, and the grandmotherly dining room in the pink-and-white house still looks like it dates from day one. It seemed obvious by their name that the thing to order was – chicken, fried southern style or American style, or stewed. We went with the southern style and before we’d even gotten a whiff of the crispy goodness, we’d been served tangy buttermilk biscuits, a refreshing cold tomato soup, a simple chicken noodle soup with the most fragrant, substantial chicken broth we’d ever tasted (might explain the presence of the “stewed” option on the menu…), sweet corn, crisp coleslaw and carrots. The chicken itself (served with lemony mashed potatoes and stuffing) was the perfect combination of baked and fried chicken – crispy on the outside, never too batter-heavy, and moist on the inside. All lovingly served as though we’d really been dining with our grandmother – with enough food to serve an army, as is the usually the case when fed by grandparents, no? Cozy and amazing.

This picture does not do the place justice, sadly. You’ll have to find your way to Sterling sometime yourself.

Day Four began with a stop in Cleveland for a famous corned beef sandwich at Slyman’s en route to Niagara Falls. Simple & delicious: fresh rye bread, 12 (!!) ounces of corned beef and a crisp pickle. (At 12 ounces a sandwich, we were amazed at how many were not being shared at the tables around us…)

And of course, no trip through Buffalo would be complete without chicken wings. We’d been tipped on to Gabriel’s Gate (apparently, though buffalo wings were “invented” at Anchor Bar, they’re not as good there) and they were excellent – amazingly juicy for such small bits of easy-to-dry-out chicken.  We tried the traditional buffalo style and the barbeque flavor, and while both were great, the buffalo style was truly a standout.

Our last day of what turned out to be a thorough chicken tour took us to Brooks Bar-B-Q in Oneonta for…more chicken.  Brooks chicken is quite possibly the best barbeque chicken we have ever had (yes, lots of superlatives on this trip).  No extra sauce  needed because it is rubbed to perfection with spices galore (of course no one at Brooks even considered telling us what their blend is…).  We got a few sticky ribs on the side to complete the barbeque picture, but at Brooks, like at Iva’s and Gabriel’s Gate, it’s aaaaall about the chicken. (The odd, red, donut-esq garnish? A spiced apple. Yes, edible!)

Here’s a detail of the chicken wallpaper at Brooks, just for good measure: 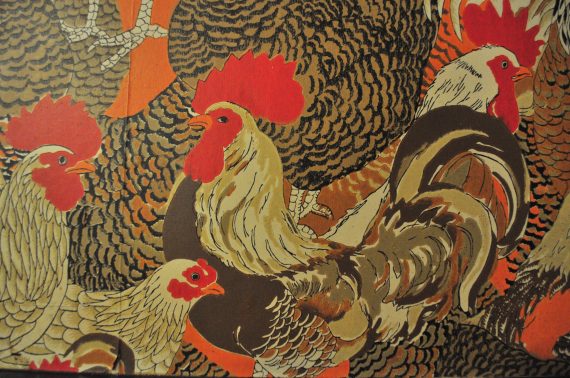 Throw in some road-side sugar snap peas and strawberries, and call it a success.