The recently-discovered Bangkok Center Grocery has been an unending source of tasty surprises. First, it carries tamarind candies, which we attempted to make ourselves back in March. And second, it has fresh pandan leaves and frozen coconut milk! 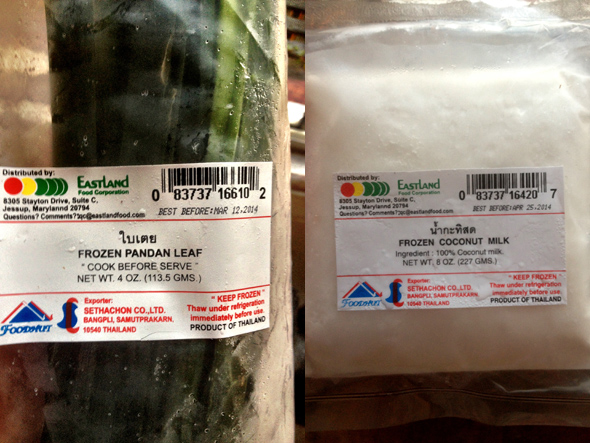 Pandan, according to Clara’s former Singaporean roommate, is the “vanilla of the East”, insofar as it’s used in the same way and with the same frequency. But it’s actually nothing like vanilla. It’s an herb, as Serious Eats editor Max describes in great detail here — a little nutty, ever-so-slightly-sweet, and incredibly intriguing.

Like Max, we too first came across pandan in Chinatown. For us, it was at the Chinatown Ice Cream Factory, where the tub of alluring pale green ice cream surprised us by being neither green tea (expected) nor mint (probable). It quickly became our favorite flavor (alongside other intriguing options like zen butter and black sesame) but, unfortunately, a rare one, unseen essentially anywhere else we frequent.

A few months back, with a few hours to kill before a Stepkids show in Boston, we spent some time at the Super 88, an Asian megastore down the street from the venue. It’s somewhat suspect (bring a scarf to hold up to your nose…), but fascinating nonetheless, and there we’d found a tiny bottle of pandan extract. We brought it home, and often pondered attempting a homemade recreation, but there was something about the radioactive green of the extract that gave us pause.

So, when we found real pandan leaves – frozen – at Yoottapong’s fabulous little spot, we knew exactly what we’d do. And, given that pandan is often paired with coconut, perhaps it was no accident that when we bent down to grab a package of these elegant leaves from the freezer at the Bangkok Center Grocery, we found them nestled up against packages of frozen coconut milk. Frozen coconut milk was a revelation — we’d only before seen coconut milk canned, but it turns out fresh milk that’s been frozen is infinitely more flavorful (of course it doesn’t last as long, but all the best things expire.) So we picked up both new-to-us goodies and headed home to tackle our own version of our Ice Cream Factory favorite.

We did a little reading and pulled together a seemingly good method using David Lebovitz’s basic vanilla, substituting the coconut milk (defrosted it came to about one cup) for that amount of half & half, with a touch of Max’s homemade extract and some extra leaf soaking.

The homemade extract was not quite as radioactive as the purchased version, but damn. Look at that green:

The ice cream turned out delicious. Earthy and rich, though not quite as green as that of the Chinatown Ice Cream Factory (perhaps that’s a good thing). Next time we’ll try it without the coconut milk, for a brighter pandan flavor.

1. Make the pandan extract. Set aside the five pandan leaves you’ll need later.  Chop the rest of the leaves into small pieces. Put into a blender, and cover with just enough water to not quite cover the leaves. Blend for two minutes. Strain the mixture well, discarding the solids, and you’ll have bright green pandan extract!

3. Once the mixture is hot and steaming (don’t boil!) remove from heat.  Knot the five pandan leaves and drop them in. Cover, and let stand for a half hour.

4. Remove the knotted pandan leaves with a strainer, and press down with a spatula firmly to extract as much flavor and color as possible. Once the flavor is squeezed out, discard the pandan leaves.

5. Pour the remaining heavy cream into a large bowl and set the strainer over the top.

6. Rewarm the infused milk. In a separate bowl, whisk together the egg yolks, then slowly pour some of the warm mint mixture into the yolks, whisking constantly. This tempers your egg yolks, and helps prevent them from scrambling. Scrape the warmed yolks back into the saucepan.

7. Cook the custard, stirring constantly with a heatproof spatula or spoon, until the mixture thickens and coats the spatula. A good way to test if it’s done is to draw your finger across the spatula – it should leave a clear mark, which indicates the custard is thickened and ready. Don’t let it go too far, or you’ll end up with scrambled custard. If you want to be safe, use an instant read thermometer – it should read around 170F.

8. Immediately strain the mixture into the cream, then stir the mixture over an ice bath until cool. Add a teaspoon of extract, stir, then taste and adjust.

9. Refrigerate the mixture thoroughly, preferably overnight, then freeze it in your ice cream maker according to the manufacturer’s instructions.

My kind of weather ☔️
“ @jr is the artist of our relationship”— @danedinberg 😎 Love love love this piece celebrating the beauty of New York, in @dominopark. Thanks @brooklynmuseum ✨#mybkm
Tall buildings, tiny sunset. #meetingswithaview
Too many favorite moments spent with you, querida @charlotte.rocker, so I chose to go deep into the 📸 archives to honor this very special day. 🥳 Here’s to many more adventures together in all their dada-esq glory, now with @jimstoloff in tow! #stoloffhisrocker
Love the Mary Poppins view. Tiny bridges, big building.
Love these mini versions of @leonardursachi’s FatBoy. New public art coming to Dumbo soon 🤩
Montreal, your mural game is 👌 #publicart
Sunset snowshoeing dans la Parc du Mont Royal ✨
Living my best 90s skater girl life. (Also, waiting in line for brunch?! Who am I?!) @arthursmtl
Pastrami pausa chez Schwartz’s.